Well, it’s been quite a week. Starting with a hot mess of a presidential debate and ending with the Tweeter of the Free World in hospital with the virus he has dismissed for months. One would hope that this scare will change his narrative and the US can start to get this pandemic under control, my fear is that if he recovers quickly (or it is spun that he has recovered quickly), nothing will be learned. His cavalier attitude, going on a photo op with a cavalcade of his protection unit without a care for their safety, indicates that far from anything being learned, this is just another opportunity to spin his ‘superman’ image. This has obviously injected the economy with a whole new level of uncertainty, just weeks away from the election . Stock exchanges around the world had a small wobble on Friday after Trump’s positive diagnosis but markets around the world are all tracking sideways (desensitised to trump Drama?).

It is interesting to note the comparison between the UK stock exchange and ours, they haven’t come even close to the pre-COVID levels, but we have (as have the American exchanges).

As consumers, we all love low-interest rates, but the ultra-low interest rates come with consequences at a country level. For a start, they prop up ‘Zombie’ companies (who can borrow at no interest instead of restructuring). Consumers can pile on credit with alacrity, which props up the consumer-spending driven US GDP. Investors (like retirees) that need ‘yield’ to produce an income are forced into riskier assets (like stocks) or face having to use their capital. It is likely that the planning for retirement was not done in this no-yield environment so it is possible that depletion of retirement capital is going become an issue in a couple of years. This low or no yield era is becoming a problem here in RSA and decent planning is essential ( even if your planner tells you you’re going to have to draw down less or stay employed longer.

As economies open up and moratoria on evictions and foreclosures expire in the property market we are going to see nasty fallout. The pandemic has accelerated trends toward work from home and ‘hot desking’ which will impact on commercial property. Living close to work is much less of an issue, and there is a trend where people are moving out of city centres, often right out into the ‘countryside’ (as long as there is an internet connection). This is going to be most noticeable in cities like London, New York etc. In Manhattan this week, offices are only 10% full. Economies around the world are recovering, the graphic here tracks the various indices and give a nice visual as to how the US recovery is progressing. Spoiler alert – it isn’t. 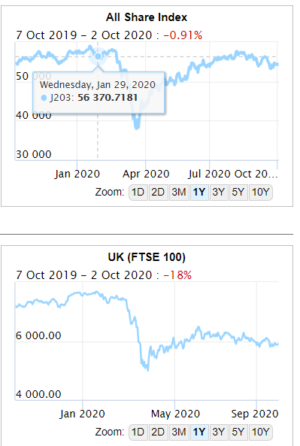 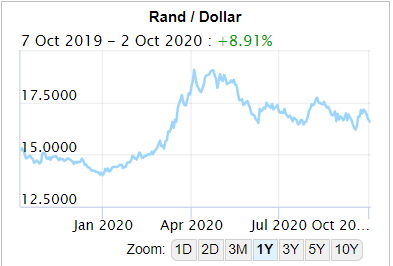 Indices: Brent crude is still soft at $39.19 and there will be a modest drop in the price of petrol at the pumps.

Just a reminder on the 2020 tax dates, that change every year (with a significant postponement of the start date this year).